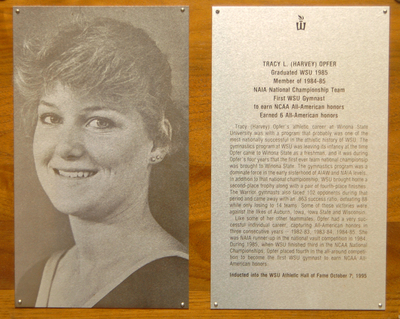 Tracy (Harvey) Opfer’s athletic career at Winona State University was with a program that probably was one of the most nationally successful in the athletic history of WSU. The gymnastics program at WSU was leaving its infancy at the time Opfer came to Winona State as a freshman, and it was during Opfer’s four years that the first ever team national championship was brought to Winona State. The gymnastics program was a dominant force in the early sisterhood of AIAW and NAIA levels. In addition to that national championship, WSU brought home a second-place trophy along with a pair of fourth-place finishes. The Warrior gymnasts also faced 102 opponents during that period and came away with a .863 success ratio, defeating 88 teams while only losing to 14. Some of those victories were against the likes of Auburn, Iowa, Iowa State and Wisconsin.

Like some of her other teammates, Opfer had a very successful individual career, capturing All-American honors in three consecutive years – 1982-83, 1983-84, 1984-85. She was NAIA runner-up in the national vault competition in 1984. During 1985, when WSU finished third in the NCAA National Championships, Opfer placed fourth in the all-around competition to become the first WSU gymnast to earn NCAA All-American Honors.