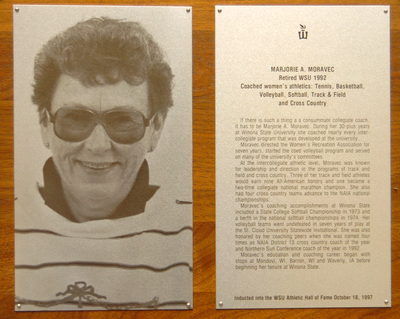 If there is such a thing as a consummate collegiate coach, it has to be Marjorie A. Moravec. During her 30-plus years at Winona State University she coached nearly every intercollegiate program that was developed at the university.

Moravec directed the Women’s Recreation Association for seven years, started the coed volleyball program and served on many of the university committees.

At the intercollegiate athletic level, Moravec was known for leadership and direction in the program of track and field and cross country. Three of her track and field athletes would earn nine All-American honors and one became a two-time, collegiate national marathon champion. She also had four cross country teams advance to the NAIA national championships.

Moravec’s coaching accomplishments at Winona State included a State College Softball Championship in 1973 and a berth in the national softball championships in 1974. Her volleyball teams went undefeated in seven years of plat at the St. Cloud University Statewide Invitational. She was also honored by her coaching peers when she was named four times as NAIA District 13 cross country coach of the year and Northern Sun Conference coach of the year in 1992.

Moravec’s education and coaching career began with stops at Mondovi, WI, Barron, WI and Waverly, IA before beginning her tenure at Winona State.