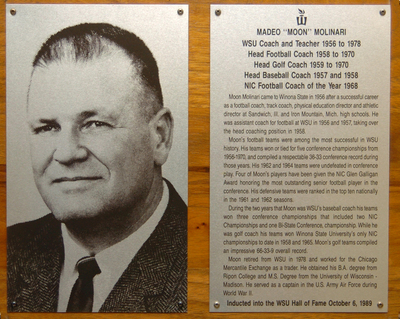 Moon Molinari came to Winona State in 1956 after a successful career as a football coach, track coach, physical education director and athletic director at Sandwich, Ill. and Iron Mountain, Mich. High schools. He was assistant coach for football at WSU in 1956 and 1957, taking over the head coaching position in 1958.He was a coach and teacher at WSU from 1956 to 1978, head football coach from1958 to 1970, head golf coach from 1959 to 1970 and head baseball coach in 1957 and 1958.

Moon’s football teams were among the most successful in WSU history. His teams won or tied for five conference championships from 1956-1970, and compiled a respectable 36-33-conference record during those years. His 1962 and 1964 teams were undefeated in conference play. Four of Moon’s players have been given NIC Glen Galligan Award honoring the most outstanding senior football player in the conference. His defensive teams were ranked in the top ten nationally in the 1962 season.

Moon retired from WSU in 1978 and worked for the Chicago Mercantile Exchange as a trader. He obtained his B.A. degree from Ripon College and M.S. Degree from the University of Wisconsin-Madison. He served as a captain in the U.S. Army Air Force during World War II.

NIC football coach of the year 1968