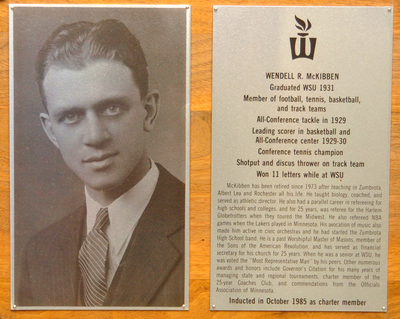 McKibben has been retired since 1973 after teaching in Zumbrota, Albert Lea and Rochester all his life. He taught biology, coached and served as athletic director. He also had a parallel career in referring for high schools and college, and for 25 years, was referee for the Harlem Globetrotters when they toured the Midwest. He also refereed NBA games when the Lakers played in Minnesota. His avocation of music also made him active in civic orchestras and he had started the Zumbrota High School band. He is a past Worshipful Master of Masons, member of the Sons of the American Revolution and has served as financial secretary for his church for 25 years. When he was a senior at WSU, he was voted the “Most Representative Man” by his peers. Other numerous awards and honors include Governor’s Citation for his many years of managing state and regional tournaments, charter member of the 25-year Coaches Club, and commendations from the Officials Association of Minnesota.