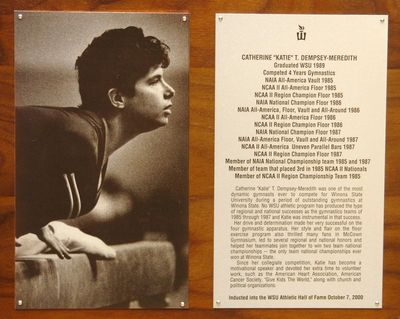 Catherine “Katie” T. Dempsey-Meredith was one of the most dynamic gymnasts ever to complete for Winona State University during a period of outstanding gymnastics at Winona State. No WSU athletic program has produced the type of regional and national successes as the gymnastics teams of 1985 through 1987 and Katie was instrumental in that success.
Her drive and determination made her very successful on the four gymnastic apparatus. Her style and flair on the floor exercise also thrilled many fans in McCown Gymnasium, led to several regional and national honors and helped her teammates join together to win two team national championships – the only team to win national championships at Winona State.

Since her collegiate competition, Katie has become a motivational speaker and devoted her extra time to volunteer work, such as the American Heart Association, American Cancer Society, “Give Kids The World,” along with church and political organizations.

NAIA All-America, Floor, Vault and All Around 1986

Member of team that placed 3rd in 1985 NCAA II Nationals