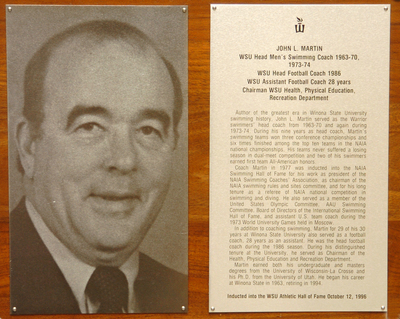 Author of the greatest era in Winona State University swimming history, John L. Martin served as the Warrior swimmers’ head coach from 1963-70 and again during 1973-74. During his nine years as head coach, Martin’s swimming teams won three conference championships and six times finished among the top ten teams in the NAIA national championships. His teams never suffered a losing season in dual-meet competition and two of his swimmers earned first team All-American honors.

He also served as a member of the United States Olympic Committee, AAU Swimming Committee, Board of Directors of the International Swimming Hall of Fame and assistant U.S. team coach during the 1973 World University Games held in Moscow.

In addition to coaching swimming, Martin for 29 of his 30 years at Winona State University served as a football coach, 28 years as an assistant. He was the head football coach during the 1986 season. During his distinguished tenure at the University, he served as Chairman of the Health, Physical and Recreation Department.