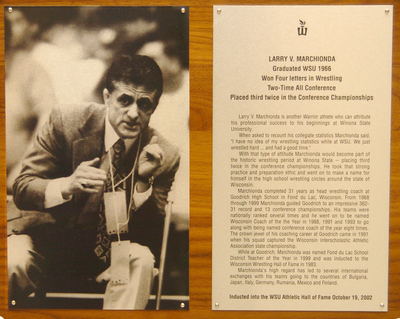 Larry V. Marchionda is another Warrior athlete who can attribute his professional success to his beginnings at Winona State University.

When asked to recount his collegiate statistics Marchionda said, “I had no idea of my wrestling statistics while at WSU. We just wrestled hard… and had a good time.”

With that type of attitude, Marchionda would become part of the historic wrestling period at Winona State – placing third twice in the conference championships. He took that strong practice and preparation ethic and went on to make a name of himself in the high school wrestling circles around the state of Wisconsin.

Marchionda completed 31 years as head wrestling coach at Goodrich High School in Fond du Lac, Wisconsin. From 1968 through 1999 Marchionda guided Goodrich to an impressive 362-31 record and 13 conference championships. His teams were nationally ranked several times and he went on to be named Wisconsin Coach of the Year in 1988, 1991 and 1993 to go along with being named conference coach of the year eight times. The crown jewel of his coaching career at Goodrich came in 1991 when his squad captured the Wisconsin Interscholastic Athletic Association state championship.

While at Goodrich, Marchionda was named Fond du Lac School District Teacher of the Year in 1999 and was inducted to the Wisconsin Wrestling Hall of Fame in 1983.

Marchionda’s high regard has led to several international exchanges with his teams going to the countries of Bulgaria, Japan, Italy, Germany, Rumania, Mexico and Finland.