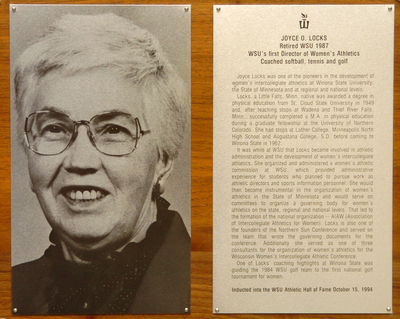 Joyce Locks was one of the pioneers in the development of women’s intercollegiate athletics at Winona State University, the state of Minnesota and at regional and national levels.

Locks, a Little Falls, Minnesota native was awarded a degree in physical education from St. Cloud State University in 1949 and after, teaching stops at Wadena and Thief River Falls, Minnesota successfully completed a M.A. in physical education during a graduate fellowship at the University of Northern Colorado. She had stops at Luther College, Minneapolis North High School and Augstana College, S.D. before coming to Winona State in 1962.

While at WSU Locks became involved in athletic administration and the development of women’s intercollegiate athletics. She organized and administered a women’s athletic commission at WSU, which provided administrative experience for students who planned to pursue work as athletic directors and sports information personnel. She would then become instrumental in the organization of women’s athletics in the State of Minnesota and would serve on committees to organize a governing body for women’s athletics on the state, regional and national levels. That led to the formation of the national organization – AIAW (Association of Intercollegiate Athletics for Women). Locks is also one of the founders of the Northern Sun Conference and served on the team that wrote the governing documents for the conference. Additionally, she serves as one of three consultants for the organization of women’s athletics for the Wisconsin Women’s Intercollegiate Athletic Conference.

One of Locks’ coaching highlights at Winona State was guiding the 1984 WSU Golf team to the first national golf tournament for women.