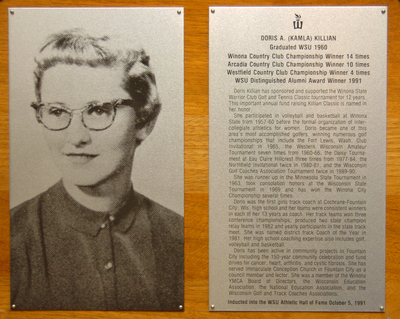 Doris Killian has sponsored and supported the Winona State Warrior Club Golf and Tennis Classic tournament for 12 years. The important annual fund raising Killian Classic is named in her honor.

She participated in volleyball and basketball at Winona State from 1957-1960 before the formal organization of intercollegiate athletics for women. Doris became one of this area’s most accomplished golfers, winning numerous golf championships that include Fort Lewis Wash. Club tournament at Eau Claire Hillcrest three times from 1977-1984, the Northfield Invitational twice in 1980-1981 and the Wisconsin Golf Coaches Association Tournament twice in 1989-1990.