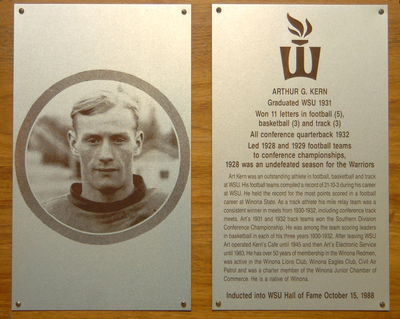 Art Kern was an outstanding athlete in football, basketball and track at WSU. His football teams compiled a record of 21-10-3 during his career at WSU. He held the record for the most points scored in a football career at Winona State. As a track athlete his mile relay team was a consistent winner in meets from 1930-1932, including conference track meets. Art’s 1931 and 1932 track teams won the Southern Division Conference Championship. He was among the teams scoring leaders in basketball in each of his three years 1930-1932. After leaving WSU, Art operated Kern’s Café until 1945 and then Art’s Electronic Service until 1983. He has over 50 years of membership in the Winona Redmen, was active in the Lions Club, Winona Eagles Club, Civil Air Patrol and was a charter member of the Winona Junior Chamber of Commerce. He is a native of Winona, Minnesota.