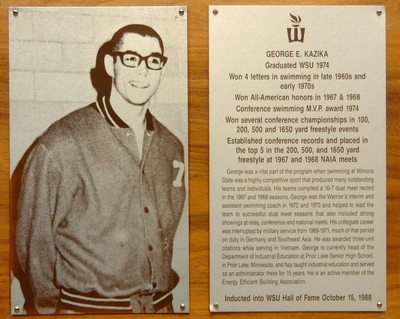 George was a vital part of the program when swimming at Winona State was a highly competitive sport that produced many outstanding teams and individuals. His teams compiled a 16-7 dual meet record in the 1967 and 1968 seasons. George was the Warrior’s interim and assistant swimming coach in 1972 and 1973 and helped to head the team to successful dual meet seasons that also included strong showings at relay conference and national meets. His collegiate career was interrupted by military service from 1969-1971, much of that period on duty in Germany and Southeast Asia. He was awarded three unit citations while serving in Vietnam. George is currently head of the Department of Industrial Education at Prior Lake Senior High School in Prior Lake, Minnesota, and has taught industrial education and served as an administrator there for 15 years. He is an active member of the Energy Efficient Building Association.