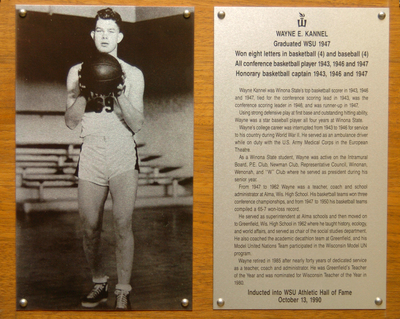 Using strong defensive play at first base and outstanding hitting ability, Wayne was a star baseball player all four years at Winona State.

Wayne’s college career was interrupted from 1943 to 1946 for service to his country during World War II. He served as an ambulance driver while on duty with the U.S. Army Medical Corps in the European Theatre.

As a Winona State student, Wayne was active on the Intramural Board, P.E. Club, Newman Club, Representative Council, Winonan, Wenonah and “W” Club where he served as president during his senior year.

Nominated for Wisconsin Teacher of the Year (1980)