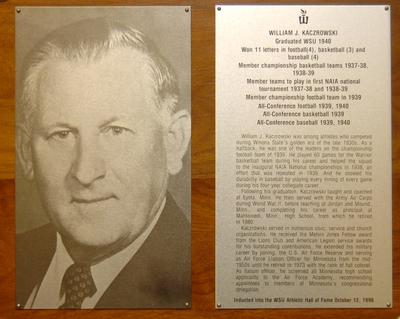 William J. Kaczrowski was among athletes who completed during Winona State’s golden era of the late 1930’s. As a halfback, he was one of the leaders on the championship football team of 1939. He played 60 games for the Warrior basketball team during his career and helped the squad to the inaugural NAIA National championships in 1938, an effort that was repeated in 1939. He showed his durability in baseball by playing every inning of every game during his four-year collegiate career.

Following his graduation, Kaczrowski taught and coached at Eyota, Minn. He then served with the Army Air Corps during World War II, before teaching at Jordan and Mound, Minn., High School, from which he retired in 1980.

Kaczrowski served in numerous civic, service and church organizations. He received the Melvin Jones Fellow award from the Lions Club and American Legion service awards for his outstanding contributions. He extended his military career by joining the U.S. Air Force Reserve and serving as Air Force Liaison Officer for Minnesota from the mid-1950’s until he retired in 1973 with the rank of full colonel. As liaison officer, he screened all Minnesota high school applicants to the Air Force Academy, recommending appointees to members of Minnesota’s congressional delegation.