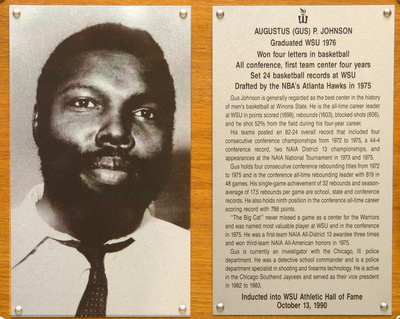 Gus Johnson is generally regarded as the best center in the history of men’s basketball at Winona State. He is the all-time career leader at WSU in points scored (1,698), rebounds (1,603), blocked shots (606), and he shot 52% from the field during his four-year career.

His teams posted an 82-24 overall record, which included four consecutive conference championships from 1972 to 1975, a 44-4 conference record, two NAIA District 13 championships and appearances at the NAIA National Tournament in 1973 and 1975.

“The Big Cat” never missed a game as a center for the Warriors and was named most valuable player at WSU and in the conference in 1975. He was a first team NAIA All-District recipient three times and won third-team NAIA All-American honors in 1975.

Gus is currently an investigator with the Chicago, Illinois Police Department. He was a detective school commander and is a police department specialist in shooting and firearms technology. He is active in the Chicago South-end Jaycees and served as their vice president in 1982 to 1983.