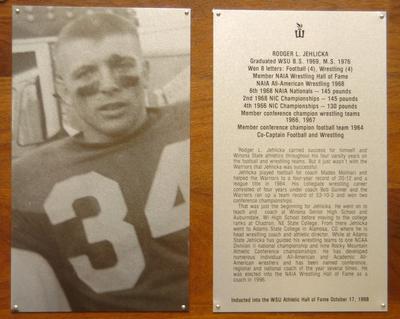 Rodger L. Jehlicka carried success for himself and Winona State athletics throughout his four varsity years on the football and wrestling teams. But it just wasn’t with the Warriors that Jehlicka was successful.

Jehlicka played football for coach Madeo Molinari, and helped the Warriors to a four-year record of 20-12 and a league title in 1964. His collegiate wrestling career consisted of four years under coach Bob Gunner and the Warriors ran up a team record of 53-10-3 and won two conference championships.

That was just the beginning for Jehlicka. He went on to teach and coach at Winona Senior High School and Auburndale, WI High School before moving to the college ranks at Chadron, NE State College. From there, Jehlicka went to Adams State College in Alamosa, CO where he is head wrestling coach and athletic director. While at Adams State, Jehlicka has guided his wrestling team to one NCAA Division II national championship. He has developed numerous individual All-American and Academic All-American wrestlers and has been named conference, regional and national coach of the year several times. He was elected into the NAIA Wrestling Hall of Fame as a coach in 1996.