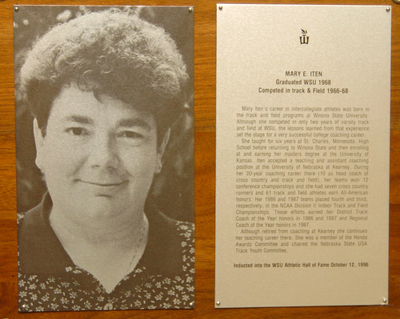 Mary E. Iten: Hall of Fame Inductee Mary Iten’s career in intercollegiate athletics was born in the track and field programs at Winona State University. Although she competed in only two years of varsity track and field at WSU, the lessons learned from that experience set the stage for a very successful college-coaching career.

She taught for six years at St. Charles, Minnesota High School before returning to Winona State and then enrolling and earning her masters degree at the University of Kansas. Iten accepted a teaching and assistant coaching position at the University of Nebraska at Kearney. During her 20-year coaching career there (10 as head coach of cross-country and track and field), her teams won 12 conference championships and she had seven cross-country runners and 61 track and field athletes earn All-American honors. Her 1986 and 1987 teams placed fourth and third respectively in the NCAA Division II Indoor Track and Field Championships. Those efforts earned her District Track Coach of the Year honors in 1986 and 1987 and Regional Coach of the Year honors in 1987.

Although retired from coaching at Kearney she continues her teaching career there. She was a member of the Honda Award Committee and chairs the Nebraska State USA Track Youth Committee.