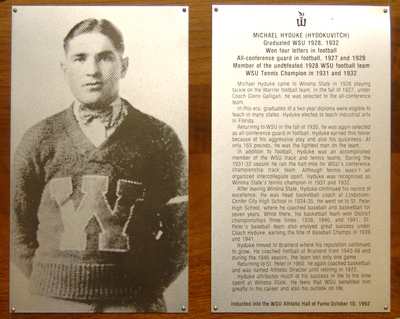 Michael Hyduke came to Winona State in 1926 playing tackle on the Warrior football team. In the fall of 1927, under coach Glenn Galligan, he was selected to the all-conference team.

In this era, graduates of a two-year diploma were eligible to teach in many states. Hyduke elected to teach industrial arts in Florida.

Returning to WSU in the fall of 1930, he was again selected as all-conference guard in football. Hyduke earned this honor because of his aggressive play and also his quickness. At only 165 pounds, he was the lightest man on the team.

In addition to football, Hyduke was an accomplished member of the WSU track and tennis teams. During the 1931-1932 season he ran the half-mile for WSU’s conference championship track team. Although tennis was not an organized collegiate sport, Hyduke was recognized as Winona State’s tennis champion in 1931 and 1932.

After leaving Winona State, Hyduke continued his record of excellence. He was head basketball coach at Lindstrom-Center High School in 1934-1935. He went on to St. Peter High School, where he coached baseball and basketball for seven years. While there, his basketball team won district championships three times: 1938, 1940 and 1941. St. Peter’s baseball team also enjoyed great success under Coach Hyduke, earning the title of Baseball Champs in 1939 and 1941.

Hyduke moved to Brainerd where his reputation continued to grow. He coached football at Brainerd from 1943-1948 and during the 1946 season, the team lost only one game.

Returning to St. Peter in 1960, he again coached basketball and was named Athletic Director until retiring in 1972.

Hyduke attributes much of his success in life to his time spent at Winona State. He feels that WSU benefited him greatly in his career and also his outlook on life.