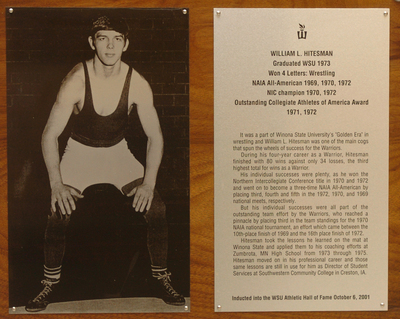 It was a part of Winona State University’s “Golden Era” in wrestling and William L. Hitesman was one of the main cogs that spun the wheels of success for the Warriors.

During his four-year career as a Warrior, Hitesman finished with 80 wins against only 34 loses, the third highest total for wins as a Warrior.

His individual successes were plenty, as he won the Northern Intercollegiate Conference title in 1970 and 1972 and went on to become a three-time NAIA All-American by placing third, fourth and fifth in the 1972, 1970 and 1969 national meets, respectively.

But his individual successes were all part of the outstanding team effort by the Warriors, who reached a pinnacle by placing third in the team standings for the 1970 NAIA national tournament, an effort which came between the 10th place finish of 1969 and the 16th place finish of 1972.

Hitesman took the lessons he learned on the mat at Winona State and applied them to his coaching efforts at Zumbrota, MN High School from 1973 through 1975. Hitesman moved on in his professional career and those same lessons are still in use for him as Director of Student Services at Southwestern Community College in Creston, IA.