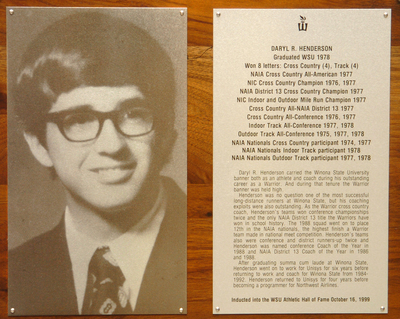 Daryl R. Henderson carried the Winona State University banner both as an athlete and coach during his outstanding career as a Warrior. During that tenure, the Warrior banner was held high.

Henderson, without a question, was one of the most successful long-distance runners at Winona State but his coaching exploits were also outstanding. As the Warrior cross country coach, Henderson’s teams won conference championships twice and the only NAIA District 13 title the Warriors have won in school history. The 1988 squad went on to place 12th in the NAIA nationals, the highest finish a Warrior team made in national meet competition. Henderson’s teams also were conference and district runners-up twice and Henderson was named conference Coach of the Year in 1988 and NAIA District 13 Coach of the Year in 1986 and 1988. After graduating summa cum laude at Winona State, Henderson went on to work for Unisys for six years before retuning to work and coach for Winona State from 1984-1992. Henderson returned to Unisys for four years before becoming a programmer for Northwest Airlines.