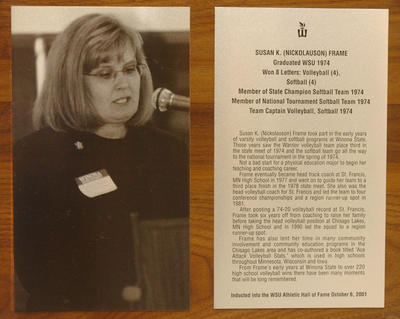 Susan K. (Nickolauson) Frame took part in the early years of varsity volleyball and softball programs at Winona State. Those years saw the Warrior volleyball team place third in the state meet in 1974 and the softball team go all the way to the national tournament in the spring of 1974.

Frame eventually became head track coach at St. Francis, MN High School in 1977 and went on to guide her team to a third place finish in the 1978 state meet. She also was the head volleyball coach for St. Francis and led the team to four conference championships and a region runner-up spot in 1981.

After posting a 74-20 volleyball record at St. Francis, Frame took six years off from coaching to raise her family before taking the head volleyball coach position at Chisago Lakes, MN High School and in 1990 led the squad to a region runner-up spot.

Frame has also lent her time in community involvement and community education programs in the Chisago Lakes area and has co-authored a book titled “Ace Attack Volleyball Stats,” which is used in high schools throughout Minnesota, Wisconsin and Iowa.

From Frame’s early years at Winona State to over 220 high school volleyball wins there have been many moments that will be long remembered.