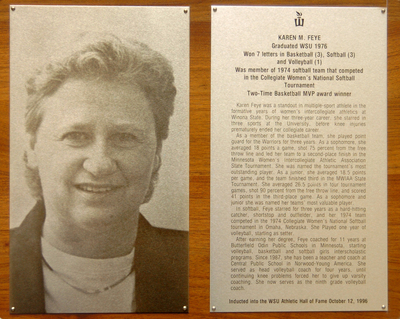 Karen Feye was a standout in multiple-sports in the formative years of women’s intercollegiate athletics at Winona State. During her three-year career, she starred in three sports at the University, before knee injuries prematurely ended her collegiate career.

As a member of the basketball team, she played point guard for the Warriors for three years. As a sophomore, she averaged 18 points a game, shot 75 percent from the free throw line and led her team to a second-place finish in the Minnesota Women’s Intercollegiate Athletic Association State tournament. She was named the tournament’s most outstanding player. As a junior, she averaged 18.5 points per game, and the team finished third in the MWIAA State Tournament. She averaged 26.5 points in four tournament games, shot 90 percent from the free throw line, and scored 41 points in the third place game. As a sophomore and junior she was named her teams’ most valuable player.

In softball, Feye starred for three years as a hard-hitting catcher, shortstop and outfielder, and her 1974 team competed in the 1974 Collegiate Women’s National Softball tournament in Omaha, Nebraska. She played one year of volleyball, starting as setter.

After earning her degree, Feye coached for 11 years at Butterfield Odin Public Schools in Minnesota, starting volleyball, basketball and softball girls interscholastic programs. Since 1987, she has been a teacher and coach at Central Public School in Norwood-Young America. She served as head volleyball coach for four years, until continuing knee problems forced her to give up varsity coaching. She now serves as the ninth grade volleyball coach.